This is a continuation of my journey on the path to become an artist of Sacred Art. If you missed the first installment it can be read here– https://www.avonnhartung.com/about-2/some-biographical-background/

Early Spring of 1962
University of Puerto Rico at Rio Piedras

I was very happy at the University and with my new home and Puerto Rican Family, the Lopez’ and 15 brothers and 15 sisters. Everything was new to me and I was learning 16 hours a day.

However, even though I was only paying $30 a month for room and board and my mother would send me $15 or $20 from time to time, I became aware that I would soon run out of money. What to do?

I went to the library and read all I could about gold mining in Alaska. Mostly I read about the Gold Rush and the fortunes that were made by prospectors who risked their lives in pursuit of it.

I questioned whether I was doing the wrong thing, thinking of gold, when I really wanted just to paint sacred art for my Catholic Church. But I decided I needed the money and I could do sacred art when I returned and finished my studies.

It did not occur to me that perhaps that bonanza had run its course, because there were many other ways to wealth if one could just get there. In short I believed in The Promise of Alaska! That’s the way some youngsters think! Simple and to the point!

Besides I wanted to SEE the world and did not view the distance or unknown factors as a problem at all. I would return to my home town and work for a couple of months, get enough money to buy a 2nd hand motorcycle, some minimum road equipment and head north. Paint signs if I had to along the way. Once I arrived opportunities would present themselves and in a relatively short time I could return to Puerto Rico and my studies.

So I secured my paintings, said my farewells with promises to return “Muy Pronto” and flew back to Connecticut to begin working towards my objective. It was early Spring, and summer businesses were just getting ready for the season.

I had somewhat of a name in the area as a Sign Artist and it wasn’t long before I had more work than I could handle. I hired a helper, an itinerant laborer and we worked our way down one beach front after another.

I bought a motorcycle off my brother (a 1955 Triumph 500 cc Trophy Bird), a sleeping bag, cook kit, canteen, some good warm clothes and bid my Mother goodbye on an overcast afternoon in late June. She could not understand why I could not wait until morning, but I wanted to get at least 300 miles behind me by the next sunrise.

Late that night I drove in an ever-tightening circle in the middle of a vast field, cut the engine and lowered the motorcycle into the grass, crawled into my sleeping bag and spent some marvelous time contemplating the beauty of the night sky.

In the morning I discovered I was in a field of clover and wild flowers. It was part of the Pittsfield Massachusetts State Park. I was on my way, but about 2,000 miles southeast of my destination. So I kicked the motorcycle into life and headed north. It was a beautiful day, so beautiful that I missed several turns and went quite a ways off my planned route. But I wasn’t worried as I was enjoying the exhilaration of the freedom I felt.

Around 9 pm that night I stopped in a picnic area well up into New York State. There was no one else around. It was completely deserted as it was not a camping site. Again I shut off the motor and gently put the bike to rest. Having enjoyed a meal of meager means I crawled into my sleeping bag and was soon in a deep dream.

Suddenly I was awakened by an alarming sound. Sitting up quickly I discovered it was a bear! It moved slowly and swaggered from side to side. At first I was frozen with fear. I had never seen a bear LIVE before, and it seemed huge! It was scary to have nothing between us but about 30 feet of open space. I looked around to see if there was a tree close enough to climb. There was none to safely run to! 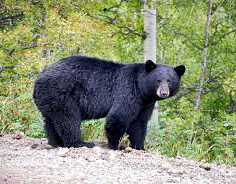 I slowly rose, slipped out of my sleeping bag, quickly up-righted the motor cycle and kicked it over. Thank God it started on the second try, and I gunned the engine. The bear rose up and then bolted for the wall of trees from where he had first appeared, and I felt safe enough to roll up my stuff and head on down the road.

After a couple of miles I came onto a small diner. It looked so welcoming there in the night. I pulled in and enjoyed the company of some local folks who were relaxing. They saw I was passing through and we exchanged stories.

I told them where I was headed and of my experience with the bear. They laughed and said it was nothing to be afraid of, as it was just a black bear, one of those that regularly cleaned up the leftovers from the days’ picnics. They said there was a campsite some 20 miles back the way I had come. It was late so they invited me to stay with them for the night.

So it was that I passed my second night more or less on the road.
Great bed! Wonderful people!

The next day after a leisurely and fulfilling breakfast with my friends, I made good mileage and crossed over into Canada. Pulling off the road that night, I parked my motorcycle beneath a very large and well-lit billboard. Climbing the scaffolding I unrolled my sleeping bag and feeling safe under the overhead lights, covered my head and knowing that my motorcycle was close by, fell into a deep sleep, awakening to the sounds of blue jays and chattering squirrels.

It was overcast and by mid morning it began to rain a lot. I had to hold up a couple of times under bridges to stay somewhat dry. I had rain gear but the force of the wind riding on the motorcycle was very uncomfortable as I had no windshield, and it was getting colder the further north I went.

I was now realizing that the weather was going to be a major factor, along with bears and other unwanted surprises that might very likely hinder my progress.

I took the opportunity to frequent some local establishments, realizing that it would be better to be patient and arrive later, than rush and risk an accident or sickness.

I recalled something my grandfather had once told me, “If you’re in a hurry, you’re probably doing the wrong thing.”

The beauty of traveling at your own pace is that you have the time to appreciate the wonders you are experiencing and to treasure those you meet, learn and share with. I felt that I need not be too worried about rapid progress but rather remain cautious and enjoy the beauty I was passing through.

The next day was the 4th of July. I had made an early start and around one in the afternoon I pulled into a small gas station in a place in Ontario approaching Sault Ste. Marie called Bissett Creek, population 28.

I filled up the tank and after checking the fastenings on the bike, returned to the road heading west. The landscape was gentle now, low rolling plains, and I could see a good half mile ahead.

Coming towards me was a light-colored car about a quarter of a mile away. I noticed that there was a hill behind it where the highway disappeared under an overpass. The day was clear and the approaching car was the only vehicle in sight.

I was just shifting into third gear, perhaps going about 50 mph, when suddenly there appeared from behind the approaching car, a red Volkswagen. It invaded my lane! And the next thing I knew I was looking up in a daze at the open sky. It was a “twilight zone” experience!

I was disorientated and wondered what happened. The clouds in my head felt like the threatening clouds overhead. I began to move and was stunned by the pain! Then I felt numb all over, and when I tried again to get up from the weeds I was lying in, a terrible pain shot through my left leg.

I swore as I looked down to see my left boot was about in line with my right ankle. My left thigh felt as if it was in a vise; it was pulsating. My dungarees on that leg were tight like a stuffed doll and felt heavy as a tree trunk. And I realized what had happened!

There was an eerie silence and a thousand small bells were ringing. Then I heard excited voices and saw the silhouettes of men coming to my side.

“My God!” one exclaimed, “You’re alive!”
“Yeah” I replied, “what the hell happened?”
“Head-on collision” he exclaimed. “The car hit you head on and you flew through the air like a pin wheel! Where do you hurt besides your leg?”

“Just my leg”, I said, looking down. “It’s broken.” I then noticed that my left foot had lain over completely along with my knee. It was my thigh.

I laid there without being moved for the better part of an hour and a half, while we waited for an ambulance. They packed blankets under and around me as best they could and covered me up. They said the ambulance would soon be there. Just relax and say if I needed anything, and if I began to hurt anywhere else.

It began to rain so the men covered me over with a canvas. It turned out they were a crew of linemen of the Hydro that had been working on the poles and overhead power lines along the roadway.

One man who had been up a pole told me he heard the crash and when he turned around he saw me spinning through the air at the same height as he, and that I then landed on the guide cables along the road lengthwise and bounced off into the weeds.

The guide cables were there, he said, to protect cars from going off the cliff that ran alongside the highway. He said if I had landed crosswise on the cables, it would have broken my back.

I ducked back under the canvas and prayed, accompanied by the sound of the rain and the now muffled chatter of the onlookers. I prayed about the death that I was spared and for all the other blessings I had been given in my life.

I remembered then why I had gone to Puerto Rico – to make Sacred Art. I found it curious and confusing thinking about what I was doing there lying under this canvas with a broken leg. Then I remembered “I was going for The Gold.”

The Ambulance finally arrived. It was, I painfully realized, a Red Station Wagon! They put me in and took me back to Pembroke, back the way I had come. It was a very unpleasant ride. I felt every bump along the 75 miles it took to get to the emergency room where I learned we were in a Catholic Hospital.

I had landed in a Catholic Hospital!
I had an eerie tingling feeling that I was back where I had started, but I felt somehow I was moving forward. A Catholic hospital! Gracias a Dios!!!