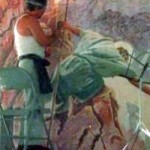 My name is Arturo Vonn Hartung. I’ve been tagged by many of my Spanish-speaking friends as Arturo because I was born Arthur, and because Vonn pronounced in Puerto Rican Spanish sounds like the Spanglish word for bum or worse, borrachón.

I first came to the Island of Enchantment in 1961 (less than a year out of High School) by myself, not knowing anybody here, with $300 and about 10 words in Spanish, 5 of which I found out later were wrong.

Upon arrival and disembarking I experienced my first case of Puerto Rican Goosebumps (piel de gallina)! The very turbulent 6 hour flight had left New York Airport in a screaming snow blizzard. Please excuse my Catholic unorthodoxy— It was for me a born-again experience!

Within 2 weeks of being here, living on Saltine crackers and peanut-butter, I went to see the Bishop of San Juan and offered my services painting Holy Paintings in the Church. I showed him my portfolio which resembled more the work of Salvador Dalí than Fra Angélico or Tintoretto.

He patiently and kindly explained to me the traditional art of Santos and sent me over to the Dominicans in Cataño.

I rode in a multicolored school bus which I caught at Plaza Colón and quickly made the acquaintance of fellow riders, some of whom carried roosters under their arm! Upon showing them the note Bishop Davis had given me, they directed me to the plaza and the designated church.

A long line of people were waiting ahead of me. It was around mid-morning and the sun was very hot. When my turn finally came many bells began to ring as I stated my intentions to the white robed priest, that I was there to paint the ceiling of his church; I had decided on the way over on the bus that that would be my best bet to begin my mission, since I had no experience in carving Santos. I told him that I only required “a place to sleep and meals to eat”.

I learned years later that he was probably Dutch so perhaps it was his limited English, and he may have taken me for a vagrant for he rose abruptly and exited, his white cape flying.

I was quite disappointed but went back to my rented one-room in Ocean Park and decided as solace to try to see if I might fit in at a university. My first meeting was with the Director of the Painting Department, Felix Bonilla Norat of the School of Fine Arts at the University of Puerto Rico in Rio Piedras. Looking through my portfolio he said I should register in the school. I reminded him that I did not speak Spanish.

He pointed to my portfolio and exclaimed,”You speak the language fluently! The language is Art!” I received my second thrill of Puerto Rican piel de gallina !

He helped me to find a boarding house for students and suddenly I had 15 brothers and 15 sisters. The rest is history! I registered as a visiting student. I learned more outside of class than I did in, but I was INCLUDED and my life changed.

A short time later I went to see Professor Bonilla again, but this time to tell him that instead of going to class I would rather go into the hills and paint the countryside and the people. With a mischievous smile he exclaimed “So would I” and gave me permission to go and paint and to bring my work from time to time for him to see.

Much else is left to be said. But for now I will just say that after many travels, trials, works of art (some sacred) and tribulations I met Patty. We fell in love. I told her of my prayer and Calling and asked her to marry me and live and work with me in Puerto Rico where I felt Christ wanted me to beautify churches with His Truth. She said YES! And so in 1984 we returned to my beloved Borinquen for our honeymoon and have been here ever since.
After some years of struggle here settling in, we were able to dedicate our lives completely to Catholic Sacred Art.

Most of the work I have been blessed to do has come from just a handful of priests. Around 1999, Padre Julio Victor Garcia commissioned me to paint a portrait of Blessed Carlos Manuel Rodriguez for his church (Parroquia San Francisco Javier).

It was shortly thereafter that I was stunned and humbled to receive a telephone call from Rome at the direction of Archbishop Roberto Gonzalez Nieves requesting that I paint the official portrait to be presented as a gift from Puerto Rico to the Pontifical North American College at the Vatican.

I accepted this great honor and so the painting was presented on the day of the beatification of Blessed Charlie (29 April 2001) by Archbishop Roberto to the Rector of the college where it hangs in the Hall of Saints.

I hope you will feel as blessed in experiencing the Sacred Art you are about to see as I have been blessed in doing it.
It is a prayer come true and a prayer I continue to pray, to be able to bring Sacred Beauty through the message of the Gospels to our people. Amen.