Read this in Spanish

When Jesus was resurrected, becoming for us The Christ, in that moment the world was changed forever! 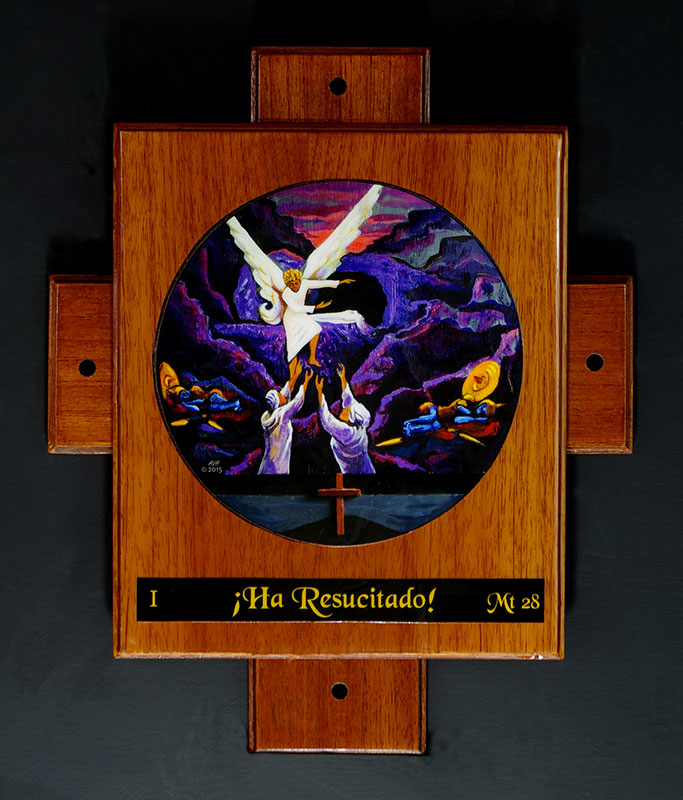 Dark was the time when Judas betrayed Jesus, which led to His suffering, crucifixion and death on the Cross; a time when the faith of His followers was tested. But when the Messiah-Christ rose on the third day, their prayers were answered, their faith fulfilled, their joy overflowing.

We are living in such dark times and now it is our faith that is being tested. We feel the sting of betrayal. Through our tears and outrage we better understand how Jesus suffered and we are drawn closer to Him.

The feeling is like Death–dark, empty and cold. But as His disciples came to know, we recognize that Jesus is Resurrected; therefore our faith is fortified, our resolve strong! For we live in the Light and have our being in the Love and Mercy of our Savior Christ Jesus.

My major project for the last five years has been to paint the Stations of the Resurrection (Via Lucis: The Way of Light) when Jesus appeared to His disciples beginning on Easter Sunday over a period of 40 days until he ascended and then gifted them with the Holy Spirit at Pentecost.

My hope is that these images will be received in our churches. They are for sale in sets of 14 but can be purchased individually for the home or in limited sets. Titles and text in English or Spanish.

The fourteen Stations shown here are high-quality reproductions. The original paintings are in the central nave of the historic Cathedral in Old San Juan, Puerto Rico (Metropolitan Cathedral Basilica of Saint John the Baptist)

Following the images, read more concerning recent history of how the Via Lucis came to be sanctioned by the Vatican, and comments on the art and motivations that inspired this all-important project.

The idea for depicting the Way of Light was inspired by an ancient inscription found on a wall of the San Callisto Catacombs on the Appian Way in Rome. This cemetery is named for Saint Callistus, a slave who eventually became the 16th pope (217-222).

The inscription found at Saint Callistus comes from the first letter St. Paul wrote to the church at Corinth (around 56 A.D.), in response to the report that some members were denying the Resurrection. The full statement in the letter is (1 Corinthians 15:3-8):

In 1988 Father Sabino Palumbieri, a Salesian priest and professor of Theological Anthropology at the Salesian University in Rome “proposed the creation of a new set of stations [to complement the Stations of the Cross] centered upon the Resurrection and the events following it, so as to emphasize the positive hopeful aspect of the Christian story which, though not absent from the Stations of the Cross, is obscured by their emphasis on suffering.”

Father Sabino wrote of this idea in the document “Give Me a Firm Footing” (1999) describing the realizations that he had “after a profound crisis of existential meaning…because of the prospect of death” followed by study of the gospels and recognizing that “With the Risen One, I know why I live.“

“Personally – thanks to this turning point of faith – I was able to continually proclaim the Risen One and in this way propose, as Paul VI said, Christianity as joy, as continual striving to supersede the stalemate of suffering without an outlet.

… A new form of popular piety, by his grace, was sketched out. It is the Via Lucis, which is the physiological second moment of the Via Crucis, that by now has spread itself throughout the five continents.

…So many suffering people write to me saying that every day they do a station of the Via Lucis, drawing from it strength, joy and peace… It does not mean abolishing the Via Crucis, which is the mirror of the suffering of Calvary without end in the world. It means only completing it with the Via Lucis, which is the mirror of the hopes of the world, especially of those to whom it most rightly belongs, the poor.”

The first major public celebration of the devotion was in 1990. It was officially sanctioned by the Vatican in 2001.

In contemplating painting the Stations, I realized that when Jesus was resurrected, becoming for us The Christ, in that moment the world was changed forever!

Earth burst into blossom, Earth glowed with light in the deep dark night of time. Everything, all Creation was illuminated with Divine significance, light, hope.

As such I painted these Stations. The intense color is meant to bring this miraculous change into our consciousness.

The colors are super-infused with hue. Each color becomes the heightened essence of itself.  These stained-glass appearing paintings might look fantasia-like. They’re meant to be however, simple in form and basic in content.

The figures show emotion in their gestures and exaggerated movements. This is to show that reality was turned on its head. Something so unbelievable had occurred that it changed consciousness forever!

The world became full of hope, full of light and full of meaning because the darkness of death had lost its power, its grip on humanity.

Hallelujah! HE IS RISEN!