Interview with EWTN about “Blessed Charlie”

Learn more about the portrait of Blessed Carlos Manuel Rodriguez

Stations of the Cross paintings 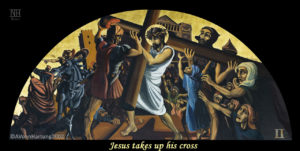 THESE STATIONS OF THE CROSS painted by A. Vonn Hartung in 2001-02 are significant in their religious content in that they express a perspective that emphasizes the effect Jesus had on those present during his ordeal of carrying his own cross to his crucifixion on Calvary. As the bystanders are pulled into his suffering we follow by observing closely, the actual Revelatory conversion of the principal Roman soldier.

Learn more about these Stations of the Cross

“The Holy Family”, an illuminated high relief woodcarving in tropical cedar and mahogany measures 42 by 44-inches square, and testifies to the revelations, dreams, miracles and prophecy of the divine events leading up to and beyond the Incarnation of our Lord and Saviour Christ Jesus. Subtitled “The Faith of St. Joseph”, as it is in Faith that we hope and have our being in the triune God of the Father, the Son and the Holy Spirit. With reflections by the artist A.Vonn Hartung.

Sacred Catholic wood carvings of Saints Peter, Paul, and the Four Evangelists explained by the artist A.Vonn Hartung. These high relief wood carvings were completed in August of 2008 for the Ambo of St. Paul Catholic Church in Pensacola, Florida for Father Doug Halsema through the Liturgical art & architectural consultant Dr. Steven Schloeder of Liturgical Environs.
The saints are all directed towards the center of the Ambo, as though they are again listening to and reliving the truth and reality of Christ Jesus that because of them and through them the gift of the Holy Spirit continues to live in us in the Liturgy of the Word. The background noise is a driving rain; listen for the amazing moment when the rumble of thunder reinforces the artist’s explanation!

Portraits by A. Vonn Hartung

Some portraits I’ve painted on commission and for my own collection. One of my portraits of Blessed Carlos Manuel Rodríguez Santiago hangs in the Hall of Saints of the Pontifical North American College, Vatican.

This video explains my process in making a painting. It is not how I make all of my paintings but it is a good example of what happens when I paint. Because even my most thought-out and planned paintings come alive dynamically and move with me as I paint. I should point out, that when I point to the face that I describe as how I started the painting, the face is actually more to the left of where I point, rather than the emerging consciousness and intellectual energy coming from the brain. So the face, which is flesh-colored, is directly to the left of where I’m pointing. I welcome any questions or commentary you may have about this painting or this process. Thank you.

The Passion of our Lord

A contemplative video showing the Passion of our Lord Jesus Christ (his arrest, taking up of the cross, crucifixion, death and burial) through original paintings and wood sculptures by the artist A.Vonn Hartung, accompanied by meditative music. 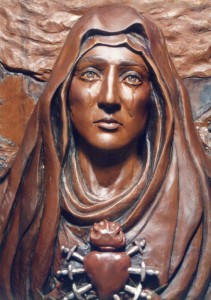 Via Lucis: Stations of the Resurrection 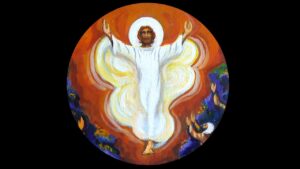 A contemplative video, accompanied by biblical text and meditative piano music, of original paintings by the artist, A. Vonn Hartung showing the Stations of the Resurrection (Via Lucis: The Way of Light) when Jesus appeared to His disciples beginning on Easter Sunday over a period of 40 days until he ascended and then gifted them with the Holy Spirit at Pentecost. The original paintings are in the central nave of Catedral San Juan Bautista in Old San Juan, Puerto Rico

The Way of the Light (Via Lucis) 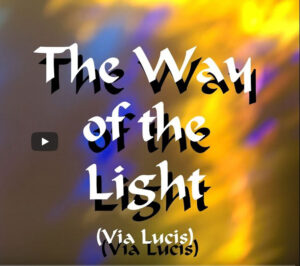 View here Vonn’s paintings, with profound reflections by a Catholic priest in England, and beautifully spoken, posted from the UK on YouTube.

Good news travels fast! No other news is as Astonishing and Life Changing….No other news changed the World more than the Resurrection of Jesus the Christ!

When you can take a 25-minute meditation break, I hope you will watch and listen to this video, the profound reflections are beautifully read by James Head, an English actor/member of the Catholic priest’s church in the UK. You will appreciate the Shakespearean quality of the reader’s voice!

(The church is in Kingstanding UK, which is in north Birmingham)

Saint Dymphna, an Irish martyr saint from the 7th century, is the patron of mental illness and anxiety. In this video I describe the life of Saint Dymphna, my process of carving her, and explain the symbolism of her pose. I carved this life-size statue in my studio in Puerto Rico in 2021 from tropical cedar for St Joseph Catholic Church in New London Connecticut, commissioned by the pastor Father Mark O’Donnell.

In the words of Father Mark—”When I first arrived at St. Joseph Parish almost 10 years ago, I was approached by three parishioners who asked me, “Father who is the patron saint for those afflicted with nervous, mental and emotional illness?” Without pausing I said, “Saint Dymphna”. After I told them about her story, they told me that they would love to have a statue of her in the sanctuary because every family has been affected by mental and emotional illness. I said I would try to get a statue of her so that we could pray for her intercession and for healing for all those who suffer. Well, it is almost 10 years later and the need for St. Dymphna’s help could not be more urgent in the world we live in. The pandemic with Covid 19 has mentally and emotionally taken a toll on everyone’s health and well-being. It has tragically taken too many lives through the disease itself, and the lives of those who are addicted to drugs and through some who desperately turned to suicide because they felt isolated and dehumanized…”

Learn more about St Dymphna and this statue 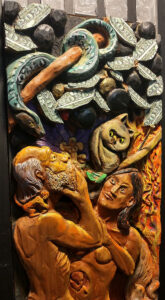 When the pandemic was announced in early March 2020 we were ordered to Lockdown in Quarantine. Vonn a professional wood carver realized that—not knowing how long we would be quarantined—he needed to do a woodcarving, as carving had always acted as a grounding effect for him. It would also need to be a carving that would speak to the Pandemic but also that which he believed brought on the Pandemic—an imbalance in the mode in which we live with Nature—the destruction of the cosmos! Impending climate collapse.

The Question is, are we—the Human Species—continuing to cause this imbalance and if so, can we correct it? This Question is the essence of the message of the carving. We see our modern-day Adam pondering this question shown more as his temptation—recalling the original story of the Garden of Eden. To answer this the Parable of The Garden of Eden and the forbidden fruit speak to us here and now as we find ourselves in a Garden Moment of Time.