The earth also is polluted under its inhabitants, because they have transgressed the laws, violated the statutes, and broken the everlasting covenant. (Isa 24:5)

This poster was originally designed by A.Vonn Hartung for an ecumenical conference on the environment organized by the Catholic Commission on Justice and Peace in Puerto Rico on Earth Day 1993.
The poster is interactive. Crayons were provided to the participants who purchased the posters–the proceeds of which went to the Faith-based environmental movement.
It depicts St. Francis giving thanks for Creation but he stands in a semi-polluted world. The scripture reading is from Isaiah 24:5 (“The earth is also polluted by its inhabitants, for they transgressed laws, violated statutes, broke the everlasting covenant”).

“Latter-Day Jonah” is a concept (a drawing with a paste on image of planet Earth) that speaks of the crisis that we face with climate change due to the overuse of carbons in our energy consumption and the unsustainable development that is taking place because of our predatory economic system and the technology that we have developed that is so powerful that it is threatening to destroy the natural balance of God’s creation.

The threat that we witness in the drawing is both the terrestrial devastation shown by the power of the bulldozer and the crisis we face in overfishing and pollution of our oceans where we see a young fisherman being swallowed like Jonah by a giant fish. This is symbolic of the Awakening of consciousness that we as a species are Awakening to as scientific data is revealed to us.

This drawing in some ways is a self-portrait as I recall becoming aware of the crisis that we face as Humanity peers into and contemplates our future.

Dedicated to this year of renewing the world. Jesus points the way to the future of a sustainable world. A future in BALANCE with God’s Creation— Nature.
A testimony to and celebration of the fifth anniversary of Pope Francis’ historic letter (encyclical) to the world, “Laudato Si’ —On Care for Our Common Home.” 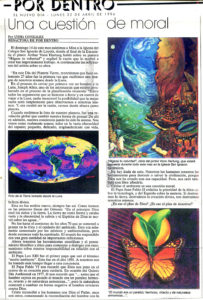 A QUESTION OF MORALITY 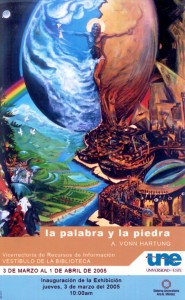