Last weekend to sign up for my Sacred Art Woodcarving Workshop/Retreat.

Whether you’d like to learn a new skill or to continue more advanced study, this class is for you!

Although Enders Island is a Catholic retreat center, it is ecumenical in spirit and outreach and all are welcome! Hope to see you there! 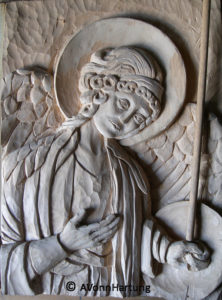 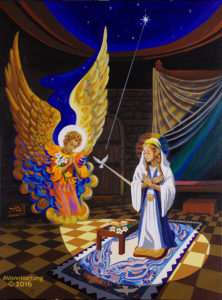 Deep in the night with the Star of Jesus centered in the sky, Mary is in prayer, surrounded by the symbols of her faith.She prays that in some small way she might serve in the coming of the promised Messiah. Suddenly her prayers are answered!

The Angel Gabriel descends in divine glory and declares the message from God the Father. After pondering deep in her heart the words and their meaning, Mary gives her consent.

At that very moment she is filled with the luminous light of grace as she vows to fulfill the will of the Father and to deliver His only Son incarnate as Jesus Christ into the world according to His divine plan for our salvation.

This original painting by AVonnHartung (acrylic 36″x 60″) was created for EWTN (UK)’s new welcoming center at the National Shrine of England (Mary’s House of Nazareth) in the village of Walsingham. The painting is an interpretation of the visions received by Blessed Anne Catherine Emmerich (Augustinian Nun) in 1821, with some added symbolism by the Artist to enhance and clarify the spiritual and prophetic consequences of the Annunciation Event.

“In 1061, the widow of the lord of the manor of Walsingham (Richeldis de Faverches) had a series of visions of the Virgin Mary, who showed her the house in Nazareth where the angel Gabriel made his revelation of the forthcoming birth of Jesus. Our Lady asked Richeldis to build a replica of the holy house in Walsingham.” It was at a time when it was extremely dangerous to visit the Holy Land, so this replica of Mary’s House would afford English Christians the opportunity to pay homage to her house in their own country. Walsingham became the premier shrine, and a large Christian community and monastery grew in its proximity.

“During medieval times, Walsingham was visited by thousands of pilgrims from all over Britain and Europe, including nearly all the kings and queens of England from Henry III (c1226). Royal visits continued right up to Henry VIII (1511). Then came the Reformation in 1538.”
When the pope refused to grant him a divorce from Catherine of Aragon, Henry VIII ordered the destruction of Mary’s House in 1538. It was burned to the ground and the statue of Our Lady was taken to London to be destroyed.
 READ MORE

The Shrine at Walsingham is visited today by 350,000 pilgrims annually.

“When England returns to Walsingham, Our Lady will return to England.”

SYMBOLISM IN THE PAINTING

The opening of the roof exposes the open sky showing the constellations of Virgo and Leo and the location of the holy house in Nazareth. The Star of Jesus, better known as the Star of Bethlehem, is used here to signify the presence and the will of the Father.

Mary’s Halo shows an ethereal lightening, a shimmering of the atmosphere around her head, indicating her divine nature; her luminosity and state of grace.

The Scroll on the prayer table symbolizes the prophecy of Isaiah (“Behold a virgin shall conceive, and bear a son, and his name shall be called Immanuel” Isaiah 7:14).

Mary’s belt shows a symbol of the Fetus.

The Three Lilies on the prayer table remind us of the promise of Joseph to honor Mary’s vow of virginity and dedication to the Lord.

The Three Lilies carried by the angel Gabriel are a sign of the fulfillment of her vow and a blessing of her faithfulness.

The Rug (woven in lamb’s wool) represents Mary’s faith and prayer life. Its design, which emanates from and surrounds the Star of Jesus (“For we have seen his star in the east…” Matthew 2:2) is made up of symbols and scenes in the life of Christ to come.

The design of the the Floor Tiles symbolizes the flow which spread the Christian Faith from nation to nation throughout the world (“Go ye and teach all nations baptizing them in the name of the Father, and the Son and of the Holy Spirit” Matthew 28:19).

The Fireplace is a symbol of the home and family, of warmth, well-being and security.

The Drawn Curtain on Mary’s bed reminds us of the torn veil of the temple (Matthew 27:51); a symbol of hope reminding us of Christ’s sacrifice on the cross, death and resurrection and promise of eternal life; the faint spectrum of color emanating from the curtain, a symbol of revelation.

The Hope Chest beneath the bed reminds us of the simplicity and humble social status of Mary, the young bride of Joseph the Carpenter. This same Mary who will become the Mother of God.